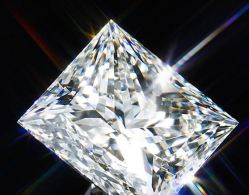 I followed that brief definition with an example. I mentioned the Oakland A’s professional baseball team of the early 2000s. It was an organization with limited resources that was able to consistently get better results than its rivals; its brilliance was manifested in the contrast with conventional baseball strategy. The book Moneyball explains this well.

Afterwards, I wondered to myself: The gemstone-to-strategy analogy seems reasonable. I wonder if it is a strong or weak analogy? Did I get the details right? So, I did what all of us do. I went to Google and typed in “What makes a diamond brilliant?”  I learned that brightness and contrast are two basic factors that drive the brilliance of a diamond.

I also learned that I hadn’t asked the right question, the idea of “sparkle” is also relevant. It’s not enough for a diamond to look good in a display case or in a jewelry store, it needs to dazzle out in the real world. As the diamond moves around, it catches light on all its facets; some reflect white, others reflect colors. The interactions are the phenomena that cause sparkle. The descriptors of fire and scintillation help us to understand sparkle.

Diamonds are cut from raw materials; they are deliberately designed. The diamond cutter must consider a number of variables when cutting a diamond. They include the original shape of the rough stone, location of internal flaws, the preservation of carat weight, and popularity of certain shapes among consumers.

Likewise, strategy is a design that is fashioned from resources and insights. The analogy holds up: A raw stone is analogous to resources, the cut is the action, and the competitive element is the fact that a customer can make a choice.

If a diamond can be deliberately designed for brilliance, so can a strategy. Here is how the sub-elements of brightness and contrast would be expressed for strategy:

Now, what about sparkle? These qualities are more elusive and subjective. It seems that large stones have more opportunity to design for sparkle, so the idea of sparkle might be something that is true for grander strategy.

My initial remark that a brilliant strategy is one that has contrast was correct. However, I’ve since learned that I missed the ideas of brightness, fire, and scintillation.

I’m looking for more examples of brilliant strategy. Also, what would you change about this analogy?